There are many ways in which a sprint can go sideways or get derailed entirely—but engineering managers often learn about these problems too late. They talk to engineers, check-in on JIRA tickets, look through GitHub, but all of these activities are spread across different tools and timelines.

One of the first and most essential uses of Velocity is to cut through the noise and help managers identify issues that may warrant their time. Velocity’s JIRA integration enables leadership to learn about impediments to sprints sooner and help their team take corrective action early.

Velocity’s newest report, Workstreams, displays Git and Jira data in concert, to help engineering managers and tech leads walk into stand-ups with a richer understanding of the health and progress of their current sprint.

The sprint header on the top right gives users an immediate view of the date range of the sprint and days remaining, so they can get a sense of how much time their team has left and whether or not they need to prioritize or cut scope.

Filter by People, Issue Type (task, story, bug), Status (to do, done, acceptance), and Epic using the dropdown menus below the sprint header. This enables engineering managers to quickly review who is working on what and where certain tracks of work sit within the pipeline.

Below, the report is organized into the following 7 columns:

Traceability measures the portion of code changes that are tracked by a JIRA issue. You can track this metric in Velocity’s Foundation report. 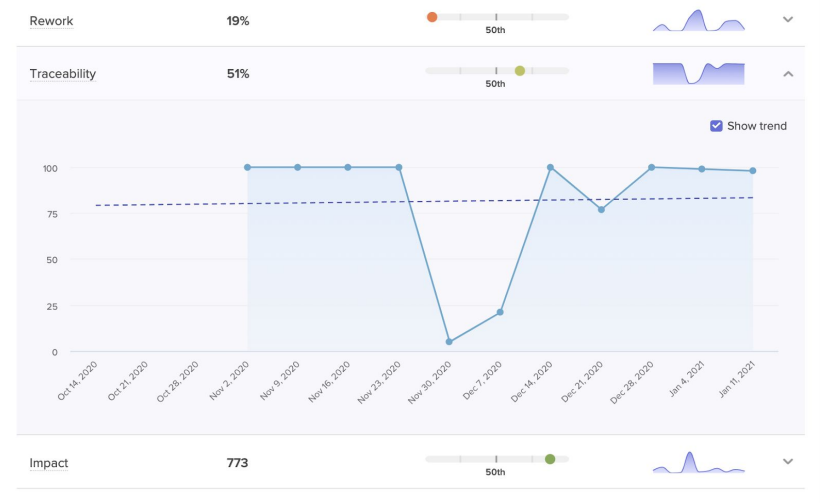 In an ideal world, all coding work goes toward completing an initiative that is clearly defined and tracked in JIRA. A high Traceability score indicates good collaboration between Product and Engineering, and that the team is working toward agreed-upon goals.

The Activity tab in Velocity’s 360 reports displays all activity types that a contributor performs. For commit activities, we give users the ability to visualize whether these commits are tied to a JIRA issue with our highlight functionality. 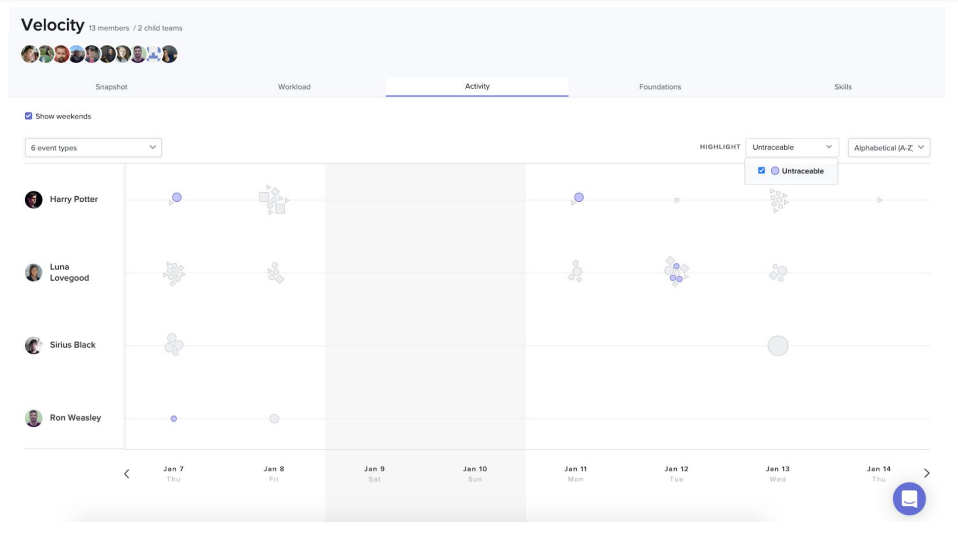 This feature gives users insight into what actual coding work (on the commit level) is going toward an established initiative, and what work may be ad-hoc or not adequately accounted for in the project management process.

As part of the slate of activities we display on the Activity Logs, we have added the Issue Comment, which appears whenever a contributor makes a comment on any Jira issue. The size of the shape is reflective of the size of the comment. 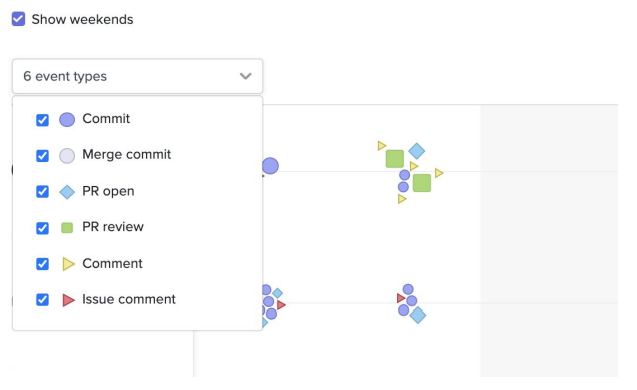 This feature enables managers to visualize the distribution of activity spent in the project management tool in relation to coding and reviewing activity. It allows managers to get a sense of how a contributor or team is dividing their time, the magnitude of those activities, and whether or not they match expectations.

Our sidebar in the Developer360 is a live feed of everything on a contributor's plate and what they've done recently. It now includes any active (in progress) issue to which a contributor is assigned. Click an issue to go directly to Jira. 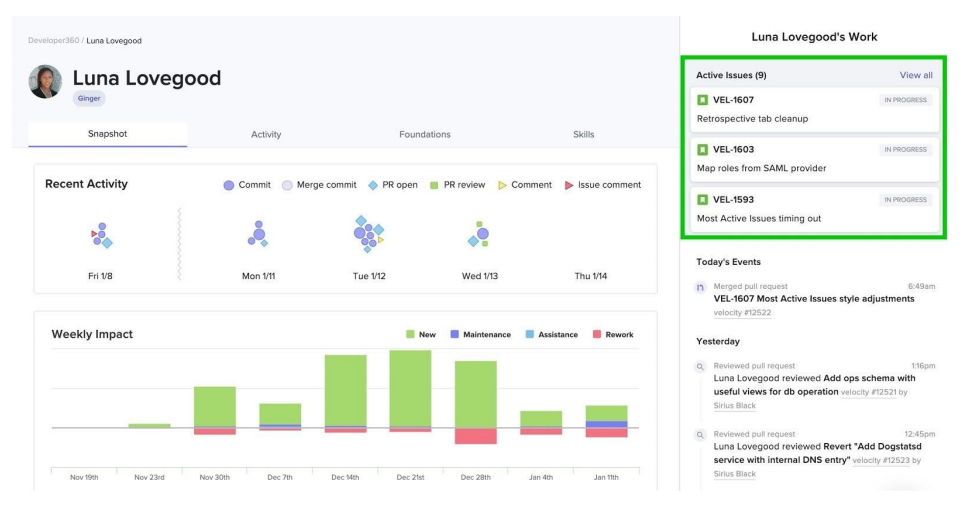 We've included Active Issues to help managers paint the full picture of their workload and responsibilities. Here, managers can spot multitasking, help with distributing workload, and get a sense for what a contributor is working on is what’s expected of them. 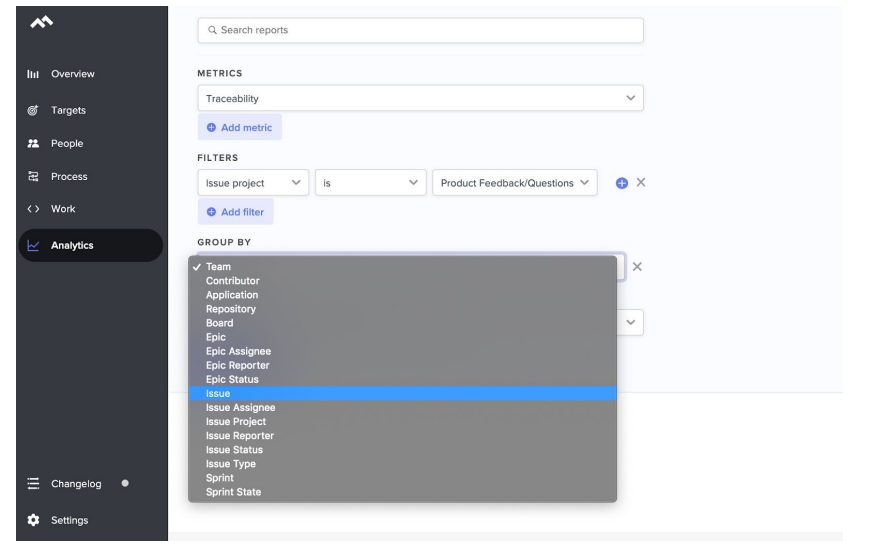 This update allows users to more deeply and specifically dive into their data on axes of their choice, with a focus on Jira. 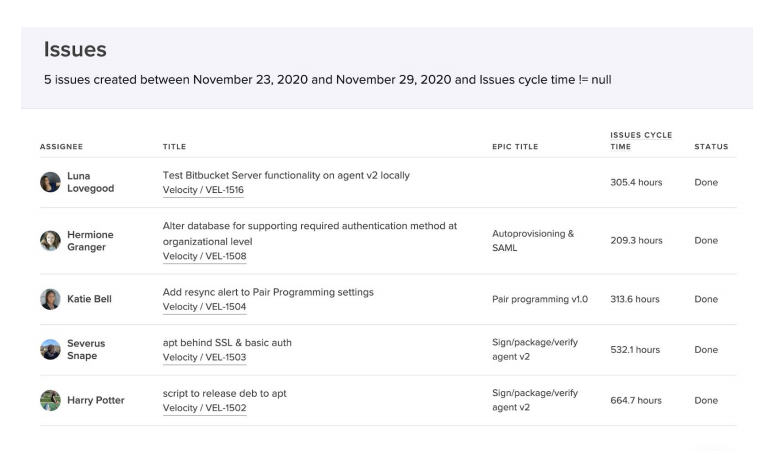 This allows users to dig further and see details around the units of work that contributed to a given average.

Velocity’s Retrospective report, found in the Team360 tab, pulls data from Jira to give managers a sense for how their team is performing relative to their project management goals over a given time frame. 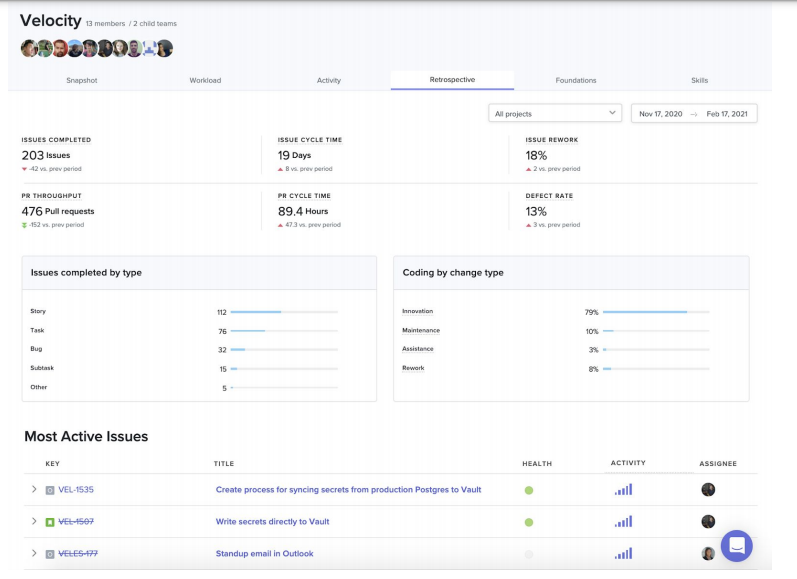 Users can use the dropdown menus at the top of the report to filter by Jira project and to select the time frame they’re interested in investigating.

The bottom of the page lists a team’s most active issues within the selected time frame, along with relevant details, including:

Clicking into an issue will bring up a drill-down of all the Pull Requests associated with that issue key, along with each PR’s Health, Activity, and Age.

Velocity’s stand-up report includes a breakdown of Traceability and Active Issues per contributor, so that managers can get a sense of how much unplanned work and active issues their engineers are taking on. 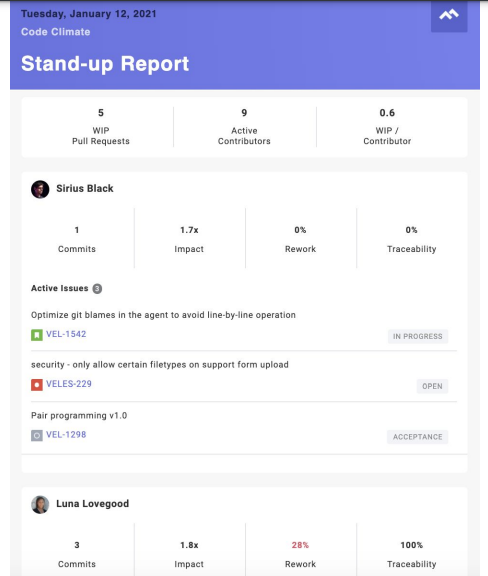 The Workload Report, found in Velocity’s Team360, pulls data from Jira to give managers a clear picture of all the development projects engineers are working on at a given point in time. 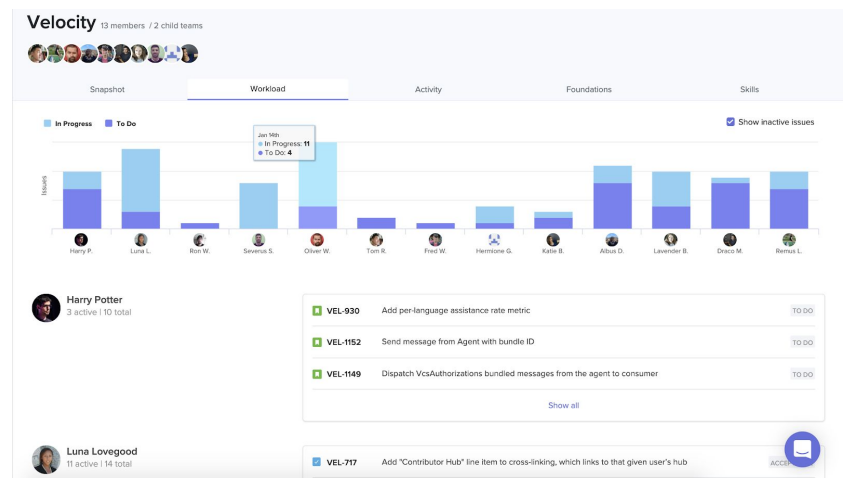 When you click into the report, you’ll find two modules:

We've added settings for users to configure their project management trackers in Velocity and add projects from Jira. 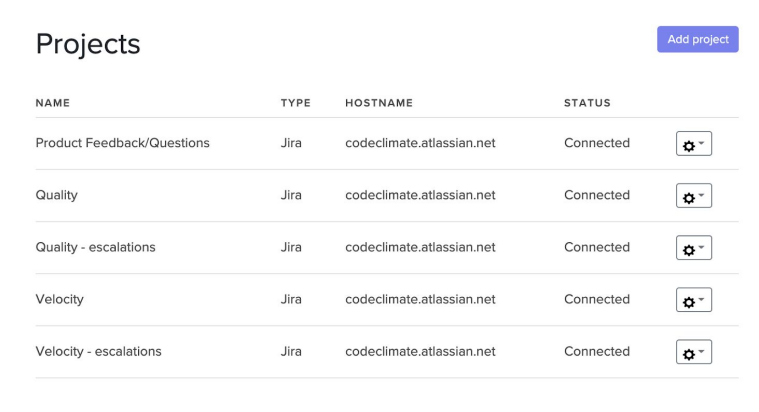